Marshmallows made at home are already much better than those from the grocery store, but it’s when you begin to infuse them with your favorite flavors that they become something truly special. Homemade Earl Grey marshmallows are just as easy to make as homemade vanilla marshmallows, but they have an extra hint of bergamot that makes them simply irresistible.

Homemade Earl Grey marshmallows require only a couple of ingredients and are inexpensive to make! If Earl Grey tea isn’t your favorite, you can absolutely substitute another tea flavor you like better. Even fruity herbal teas would give these marshmallows a light, fruity flavor.

If you’re looking for a homemade marshmallow without corn syrup, substitute golden syrup for corn syrup. I began making marshmallows with British recipes that used golden syrup (thank you, Martha Collison!), which is just water and sugar boiled down to a thick syrup on the stove. I prefer to use that over corn syrup, but it’s harder to find in the United States. It’s easy to make golden syrup at home, but it does take an hour or two.

If you’ve never made marshmallows before, there are a few key things you need to know:

Brewing the Earl Grey Tea for the Marshmallows

The Earl Grey tea is what gives these marshmallows their distinct bergamot flavor. For best results, use a newer container of Earl Grey tea. Generally, the fresher the tea, the stronger the flavor.

Steep one tea bag or a teaspoon of loose leaf tea in half a cup of hot water for up to five minutes. We want it strong!

Be sure to let the tea cool significantly until it’s just barely warm or even slightly cool before moving on.

Grease Your Pan and Any Spatulas You Plan to Use

Marshmallow is incredibly sticky and begins to set almost immediately, so line and grease your pan before you do anything else.

I cannot emphasize this enough. I once forgot to line and grease my pan in advance, and I had the hardest time getting the marshmallow out of the bowl. It had already begun to set on the sides, and everything became a sticky mess.

To make removing the marshmallow easy and painless, line a baking dish with plastic wrap. I tape the corners down to prevent the plastic wrap from moving too much.

Then spray with a nonstick spray. Or spread a few drops of canola oil with your fingers across the bottom and up the sides of the plastic wrap.

Preparing the Gelatin for Homemade Marshmallows

Gelatin needs to hydrate before we can use it to make marshmallows. To do this, which is called blooming the gelatin, sprinkle the gelatin over the cooled tea in your mixing bowl.

You’ll see the gelatin begin to absorb the tea. There will be a little of the gelatin left dry on the top; that’s okay.

How to Make the Sugar Syrup for Homemade Marshmallows

The sugar syrup is pretty straightforward. Mix together sugar, corn syrup (or golden syrup), and water before setting it over medium heat and cooking it to 270°F/132°C. A candy thermometer is highly recommended to make this easy on you. If you don’t have a candy thermometer, you can use a glass of cold water to test if your syrup is at the soft crack stage.

You will want to swirl the pan or stir it every so often to ensure your candy thermometer is giving you the correct temperature. Because there’s not much syrup in the pan, the thermometer may be registering the heat of the bubbles on top of the syrup and not the temperature of the actual syrup below. I swirl the pan every couple of minutes in the beginning and then once every 30 seconds or so when the temperature starts getting close (around 250°F or so).

A note: You can stir the syrup with a spatula in this recipe, as it has enough corn syrup in it to prevent any worries about crystallization (see section on stirring if you’re curious).

Pouring the Hot Sugar Syrup into the Mixing Bowl

This is easily the most challenging part of the entire recipe, but it’s not difficult. Take it slow and concentrate on where the stream is landing inside the bowl, and you’ll be fine.

The first bit of syrup that comes into contact with the metal of the bowl cools down significantly and won’t stream down into the final mixture. However, any syrup poured on top of that syrup will make it into the marshmallow mixture.

That initial bit acts as an insulator between the syrup straight from the pan and the bowl. Do your best to limit the amount of syrup you pour directly onto the bowl after that first stream of syrup. Layer it all in the same spot, if possible.

I like to turn my mixer on low right before I begin pouring the sugar syrup into the bowl. Start slow, and begin pouring in a steady line down the side of the bowl. I aim for somewhere within the top half of the bowl to prevent pouring any of the syrup on the tines of the whisk as it goes past.

Continue to slowly tilt the pot to get almost all of the syrup in. It’s fine if you have a little syrup leftover (say, just enough to cover the bottom of the pan).

Marshmallows can easily be underwhipped, so follow these guidelines to make sure you end up with pillowy homemade marshmallows.

After all the sugar syrup is added, the bowl will be very warm, if not hot, to the touch. As you incorporate air into the marshmallow, two things happen: The marshmallow begins to aerate, and the bowl cools down.

The time it takes to whip the marshmallow can vary depending on the speed of your mixer, but it generally takes 5-10 minutes. For me, it takes closer to 10 minutes than five.

You’ll hear your mixer start to struggle or slow down a bit once the marshmallow starts thickening up.

You’ll see small strands of marshmallow on the top of the mixture when the mixture is almost ready. The bowl will also be only slightly warm to the touch. Once it’s aerated enough, the marshmallow will clump up in the base of the whisk, much like a meringue (see the photo below).

Pouring the Homemade Earl Grey Marshmallows in the Pan

Use an oiled spatula to immediately transfer the homemade marshmallow into your lined and greased pan. It should spread out some, but I always like to help it along into the corners.

Then, flatten down any large tufts or peaks with your oiled spatula. You may need to respray or reoil the spatula depending on how uneven the surface is.

If you find the spatula to be more sticky than helpful as you go, oil your clean hands and spread the marshmallows manually.

Then, set the pan aside for 1-2 hours until the marshmallows have set.

Use a sharp knife (or cookie cutter for fun shapes!) to cut the marshmallows as desired. Tap each cut side with powdered sugar, then dust off the excess to prevent them from sticking to each other.

Store in an air-tight container. For best results, use a zipper-lock bag that you can squeeze excess air out of. That will help the marshmallows stay soft for longer!

I’ve gathered these troubleshooting tips over the last couple of years of making marshmallows. Hopefully they can help you troubleshoot if you’re having issues getting your marshmallows to turn out.

Why Does My Homemade Marshmallow Have Hard Clumps of Sugar In It?

Clumpy marshmallows are no fun! This can happen for a few different reasons:

To prevent hard lumps of sugar in your homemade marshmallows, make sure that your sugar syrup is very close, if not at, 270°F/132°C.

Then, do your best to pour the syrup down the side of the mixing bowl and not directly onto the tines of the whisk. If you’ve never poured a hot syrup into a bowl with a mixer going, it can be stressful. It is hard to prevent any syrup from ending up on the tines of the whisk, but minimize the amount to prevent unpleasant sugar lumps in your marshmallows.

If you have a hard time getting much marshmallow out of the bowl, it may be underwhipped or didn’t have enough of the sugar syrup incorporated into it. Try whipping the marshmallow for longer to increase the volume. The bowl should be only slightly warm to the touch by the time it is ready to be poured into a greased pan.

Marshmallow also begins to set very quickly, almost immediately after you turn off your mixer. If you did not begin to transfer the marshmallow into the pan right after you stopped whipping it, that will limit the amount of marshmallow you’ll be able to scrape out of the bowl.

I once forgot to line and grease my pan in advance, so I did that in a couple of minutes after turning off my mixer. I was only able to scrape out half of the marshmallow because the rest of it had started to set. That was a very sad and small batch of marshmallows.

There’s a Lot of Marshmallow Left Behind in the Bowl

There will be a good bit of marshmallow residue left behind in the bowl, because it’s just a really sticky confection. When you’re cleaning up, don’t waste time scrubbing it out. Simply let it soak in water for 10 minutes and then rinse out the bowl.

As mentioned above, these marshmallows go wonderfully in hot drinks. Try them in my salted caramel hot chocolate when it’s cold for a cozy drink to warm you up. Or add these ones to a London fog tea latte!

If you’re a big fan of teas (and especially Earl Grey) with chocolate, try my recipe for rosy Earl Grey truffles. Each truffle is infused with rose petals and Earl Grey tea for an easy to make, gluten-free, and vegan/dairy-free dessert.

Marshmallows and meringue are really similar! If you liked making these homemade marshmallows, you would also probably enjoy making these lifelike robin’s egg macarons, made with two kinds of meringues.

These homemade Earl Grey marshmallows have a cleanup rating of a 3 out of 5. Marshmallow dissolves in water easily. Soak your mixing bowl, spatula, and whisk attachment for about 10 minutes before starting on the dishes in earnest. Most of the marshmallow will rinse down the sink with little effort!

Store in an air-tight container for up two weeks. (A zipper-sealed bag works best to limit extra air from drying the marshmallows out.)

These marshmallows can be used like store-bought marshmallows: Use in Rice Krispy treats, toast over an open flame, or mix into ice cream!

Thanks for trying out my recipe! Please consider rating this recipe so others find it, too.

I’d love to see how your recipe turns out: Take a photo and tag me on Instagram @floralapronblog to share with me, or use the hashtag #floralapronbakes. 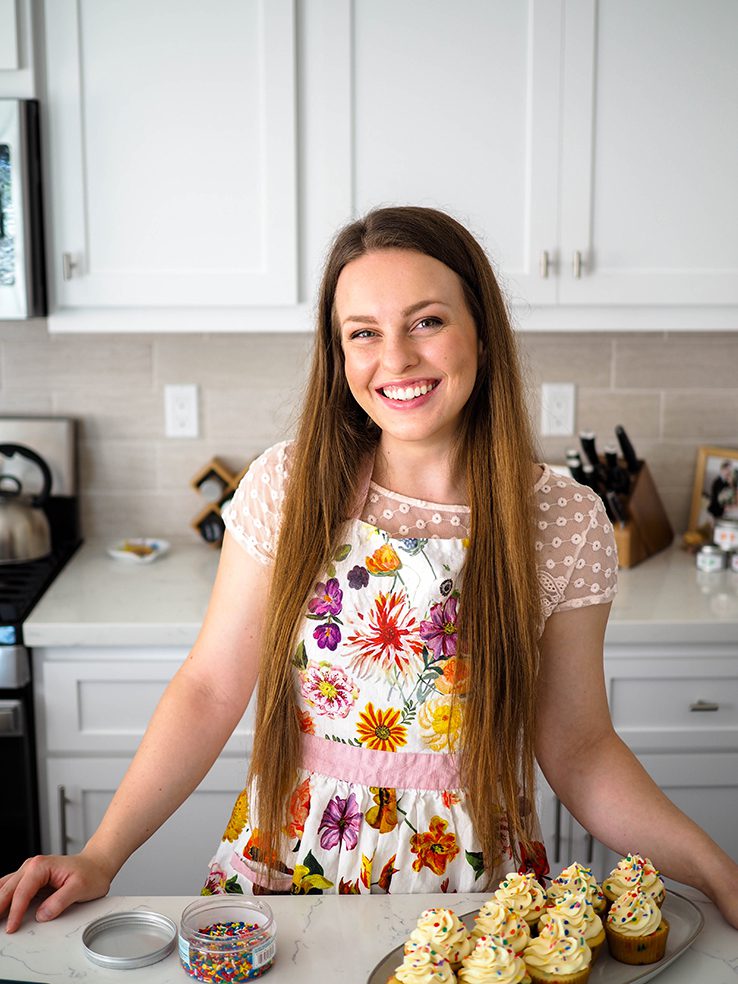